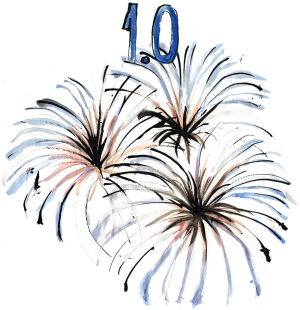 Any day we release a new FoxyCart version is a big deal for us, but we’re more excited for today’s release than for any release prior. Why? Partly because of what’s in FoxyCart v1.0, partly because of some of the changes made that are facilitating great things in future versions, and partly because of the symbolic importance of the “one-point-oh” milestone and what it means to us as a company.

The Importance of the Number 1.0

After being live for 5+ years and processing $100,000,000+ in transactions for merchants around the globe, you might be wondering how we’re just now hitting “1.0”. We blogged about the importance of the number “1.0” earlier, but the gist of it is simply that we didn’t think much about our actual version numbering strategy when we started building FoxyCart. But because of the perceived importance of the number, paired with the stability and age of our platform, we wanted to make it clear that FoxyCart is a mature product capable of handling ecommerce needs for both small and large businesses.

If you’re interested, you can read the full changelog, but we’ll summarize a few highlights that we’re really happy with in 1.0. There’s a lot that’s gone on behind the scenes as well, much to do with the new API (currently in private beta) and future functionality, but the stuff that we believe will make FoxyCart developers happy (and FoxyCart merchants more profitable) are:

We’ve partnered with Tax Data Systems to provide automatic tax rates for US-based merchants. If you’re in CA, NY, CO, WA, or many of the other states that require impossibly complex tax calculations based on state, county, city, and arbitrary jurisdiction boundaries, you can now enable zip-code based tax rates with just a few clicks. From feedback we’ve received it seems like New York makes the biggest deal out of this, but with Amazon.com now starting to charge California sales tax even though they don’t have nexus in California, this may become a much bigger deal for all US-based merchants. Read more about the new taxes.

When we launched FoxyCart in 2007, we attempted to make any HTML we output by default (and that wasn’t modifiable by the user) as “CSS Zen Garden” as possible. Over the years, this approach has proven to be a solid start (especially when paired with jQuery to get a little more advanced), but with FoxyCart v1.0 we are including native Twig templating for nearly all HTML that FoxyCart outputs. (If you’re not familiar with Twig, it’s nearly identical to Django’s template language, which is also nearly identical to Jinja and H2O, and close enough to most other template languages that it should hopefully be easy enough for most web devs to pick up quickly.)

Want a li based cart instead of the default tables? No problem. Want to dramatically restructure the checkout? Totally doable. Need to use some advanced logic in your email receipt templates? Have at it!

In addition to providing benefit right now, however, we have some really fun things in the works using Twig (like customizable datafeed formatting). That’s coming in a future version, but we’re excited about the possibilities offered by having a solid and secure template system.

Though not a major new feature, we are really happy with the new country and state/province/county autosuggestion/autocompletion tool we’ve put together. We have a full blog post about this that we’ll post in the next few days, but the quick summary is that it: 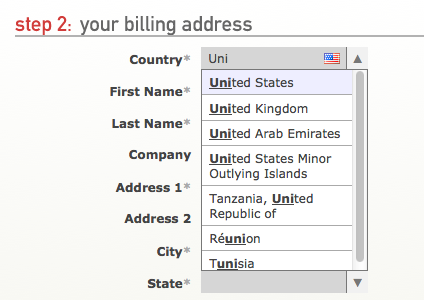 Check out more info about the world’s best autocompleter / autosuggester, and subscribe to our RSS feed so you don’t miss the followup blog post with more details.

There are many other changes that might be useful depending on your usage (like the ability to ignore past due amounts in subscriptions) that are available in the complete changelog. As warned in our earlier post, we realize that this release doesn’t include the two most highly requested features: shipping improvements, and gift certificates. We can assure you that those are both extremely high priorities, but shipping wasn’t ready in time for this release (we’re still working on the new UI), and gift certs will come after shipping. We understand that many of our users have been waiting on these improvements for years, and we understand your pain and frustration. That said…

The Symbolic Importance of This Release to Us

In addition to the visible improvements made with this release, we want to share a little about what’s going on behind the scenes with FoxyCart. In the past year we’ve seen tremendous changes to FoxyCart, and we’re excited about the foundation we’re laying for the future.

From our start we’ve been a bootstrapped company, self-funded and proud of being able to make decisions without worrying about arbitrary growth goals or investor demands. It’s been a slow road, but in the past year we’ve gone from 2 full-time and 2 part-time team members to 7 full-time and 2 part-time team members. We’ve also made major progress on improving our infrastructure in some extremely serious ways (hot failover systems and greatly improved cache handling, to name a few). And with the work Luke has been doing on our new API we’ve laid the groundwork for things like multi-currency support as well as template “sets” and gateway “sets”.

On the “marketing” front, we finally refreshed this www website, started blogging more regularly, and have started sponsoring events and doing more “real” marketing. So if you have any web dev conferences in your area you’d like us to sponsor, let us know!

We realize that we’re teasing you with functionality that’s not ready yet, but we try to be as transparent as possible. The only “investors” we need to worry about are you, our users. We’re in this because we’re developers ourselves, and our goal is to serve the web development community with the best ecommerce platform possible. After five years live, it’s still humbling to think that we wouldn’t be where we are without each and every one of our users’ support and honest feedback.

The following was originally emailed to all FoxyCart users on 2009.12.15. It is published on...

Foxy’s coupon functionality just got better, with the ability to blacklist products that should not...

Like they say, “good things come to those who wait”. Well, the wait is finally...