Over the many years we’ve spent building FoxyCart, we’ve received a lot of feedback by email and our forum, but not nearly as many public reviews on others’ blogs and sites. Maybe it’s the relative infrequency of “real” reviews (as opposed to the directory sites that just scrape our site content), but reading reviews by our users is full of nervous excitement. It’s not quite so much, “Did they like us?” as much as it’s, “Did they understand us?”

Our new website has made noticeable improvements to metrics that matter to us, but one thing analytics can’t show is whether it’s communicating what FoxyCart is, why it is that way, and how it’s different. Luckily, reviews can provide valuable insight there, as they provide a really deep view of a single user’s understanding. From the review we can look at our branding and messaging and see whether or not we’re on target. (At least, that’s our belief right now. We could always be wrong 🙂

So with that said, we wanted to highlight two recent reviews. Both are positive, but we can assure you we’d include a negative review (and what we learned from it) if one was available.

David Goodale at Merchant Accounts.ca wrote what might be the most in-depth exploration of FoxyCart we’ve seen, and validated not only some of our new website’s messaging, but also some language we toyed with but haven’t (yet) used. Things like “not the kitchen sink”, “by developers for developers”, and even the “right tool for the job” idea.

David also points out that “FoxyCart is the most SEO friendly type of cart possible – to the right user.” This is a sentiment echoed by guest blogger Patrick Pitman in a recent blog post, and makes us think that perhaps we should add a feature page about SEO. It’s true that FoxyCart doesn’t really “do” anything as far as SEO is concerned, but in some ways that’s better than a poor attempt. (And even if it’s well done, optimized pages is only a small fraction of the battle.) Our “lack” of SEO is also listed on at least one competitor’s website comparing them to FoxyCart, as though by our failure to mention SEO we by default get the big red “X” instead of the pretty green checkmark that they gave themselves 🙂

Like David’s review, Kevin Webster’s FoxyCart review did include some ideas and language we’ve used before, but not always in the way we’ve used it. For example, Kevin calls us “e-commerce software” and draws a distinction between “shopping carts”. He also has a heavy emphasis on FoxyCart as an API-driven service, calling it a “checkout and payment API”.

This is really interesting to us because we’ve spent considerable time over the years discussing the distinctions. With the new API (fully RESTful + Hypermedia, aka. HATEOAS; email us if you’d like a sneak peek) we are moving towards positioning FoxyCart as an “ecommerce platform” and “ecommerce API”, so Kevin’s language is encouraging.

Kevin also asks a question we get more than we’d like:

So What Am I Paying For Exactly

Every time we get asked this question (usually by phone), it makes us think we’re doing a horrible job communicating our value. Kevin answers his own question, but the fact that he asks it confirms to us that we may need to more explicitly address that question.

We also really like the way he closed his review:

I recommend FoxyCart to developers if at least 3 of the following are true:

Why do reviews matter? It’s the honest feedback!

We’ve been approached by many web design and development blogs offering a review of FoxyCart in exchange for money or advertising. We also see a lot of affiliate marketing with (what I consider to be) fake reviews designed to be copy/pasted into multiple sites. We’ve never done anything like this, largely because I consider our target market (web developers) to be smarter than that.

But it’s also because product reviews are far more important than inbound links for SEO, or for confirming to other potential buyers that your service doesn’t suck. Reviews are most useful for learning from your most important asset: your users (or customers). Is your messaging on target? Are they using fundamentally different language and concepts to describe the product? Are they even in the target market you thought you were going after? Are they getting different benefits out of your service than you thought were important?

If they are, fantastic! If they aren’t, there’s a tremendous amount to learn even from a bad review. (Indeed, in our experience most of the negative feedback we receive are because we didn’t do a good enough job discouraging users in target markets we know we’re not a fit for. We’d rather not have a signup than have the wrong signup. Though I suppose we could be crazy in that preference.)

What about you? Whether they’re reviews on blogs or Twitter or Facebook or Google+, or on your site’s internal 5-star+comment review system, or Amazon, how do you handle reviews? What’s been useful to you? Not selling a tangible product we’re certainly not the authority in product reviews, and we’d love to learn from you.

If you’re not using video in your marketing, you are missing out on sales. Every...

“To tell somebody that he is wrong is called criticism. To do so officially is... 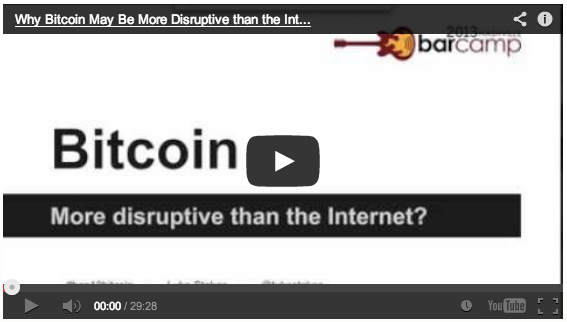 Could Bitcoin Be More Disruptive than the Internet?

Cryptocurrencies will change the world. Bold statement? Maybe. On November 2nd my 30 minute talk at Barcamp...